“The Granite, Marble, and Quartz Specialists”

Everything You Need to Know about Quartz Countertops

Quartz is one of the hardest minerals found on earth, so it should come as no surprise that your quartz countertops in Atlanta can be found on many kitchen countertop surfaces in Atlanta. Not only are these countertops durable, they’re also quite appealing to the eye and come in a variety of colors and patterns. Unlike the other popular stone used for countertops—granite—quartz countertops are engineered by fabricators who combine quartz crystals with polymer resins for binding and pigments for color. This is done by grinding the mined quartz crystals into an aggregate that’s fused with the resin binders under concentrated heat and pressure to create a solid slab. During this process, pigments are also added to impart colors to the countertop. 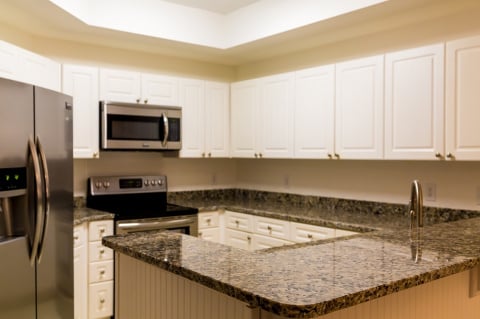 The resulting slab is roughly 93% quartz and 7% resin, though in some instances tiny amounts of metallic flecks or recycled glass are added into the mix. In addition to binding, resins also give the counters stain and scratch resistance, making the countertop nonporous so that you never need to seal it. Granite, on the other hand, needs to be sealed at least every 3 years and preferably once a year. It’s no wonder that countertop specialists near Atlanta find quartz to be such a popular item among their customers. Similar to natural stone, quartz slabs are quite heavy and can crack if not suitably handled. It’s recommended that you don’t try to install the product yourself but rather use only qualified contractors to do so.

If you were wondering where the word quartz had its origins, you may wonder no more. It appears to have come from the Slavic languages for the word “hard” and was passed into German as the word “Quarz” from which we derive the English word “quartz.” As for the substance itself, quartz is the second most abundant mineral found on our planet and makes up approximately 12% of the earth’s crust. Minerals have a definite chemical composition, unlike rocks, such as granite—another popular substance used for your countertops—which are themselves composed of various minerals. Also, minerals tend to have consistent color, whereas rocks do not. In the case of quartz, you can find it naturally in a variety of colors from amethyst (light to dark purples), to citrine (pale yellows to browns), and various shades of pinks, reds, and whites. Some quartz minerals are completely translucent and have often been used for carvings and statues.

Although you will find some quartz countertops are actually made from quarried slabs, newer engineered products are actually made through a manufacturing process that mixes ground natural quartz with polymer resins. Most of the quartz that is mined is contained in rocks, such as granite, and smaller amounts from sedimentary and metamorphic rocks. The highest concentrations of quartz, however, can be found in those sedimentary and metamorphic rocks such as sandstone and quartzite, which is also used for quartzite countertops and is also found in sand dunes. The quartz that you would find in the sand and sedimentary rocks has usually been concentrated through the process of erosion and weathering of other rocks—particularly granite. The world’s largest deposits of amethysts, which is a popular form of quartz, are found in Brazil, Mexico, Russia, France, Namibia, Uruguay, and Morocco. One of the most significant sources of rock crystals can be found in the Ouachita Mountains, which extend from eastern parts of Oklahoma to central Arkansas.